Yedîʽbêl’s hair is depicted in the shape of snail-shell curls and he wears a full beard. Furthermore, he is wearing a tunic and a himation. He is holding a book-roll in his left hand, and his left little finger is adorned with a finger ring.

The relief is rectangular with a centrally-placed male bust. The figure, Yedîʽbêl, is depicted on a loculus relief. The background is slightly weathered and a fragment of the upper right corner is missing. The portrait itself is well-preserved, only with a slightly weathered surface. Two inscriptions are visible, one in the upper left corner, and one in the upper right corner. Both inscriptions carry traces of a dark pigment. His arms are bent in front of its torso, with the lower part of the arms appearing too short in relation to the body. His hair is arranged in rows of snailshell-curls covering a majority of his head. The individual strands of hair are indicated by incised lines. Overall, his face is diamond-shaped, with a protruding forehead and eyebrow rendering indicating vertical ridges. His eyes are large, almond-shaped, with irises indicated by an incised circle and pupils being indicated by small depressions. Only the tail of the helix and the earlobe of Yedîʽbêl are visible under his hair. His nose is short with a wide base, with incised alae. He has a full, wavy beard, which is indicated by ridges. The mouth is small, with a particularly full lower lip. He is wearing a tunic with a v-shaped neckline and with semi-circular folds indicated by ridges on the chest. He is also wrapped in a himation, covering both arms and the left side of his chest. The folds are indicated by ridges. His right arm is held in a sling created by the himation and the left arm is flexed and held in front of the torso. The fingers of the right hand are slightly flexed around a fold of the himation. The fingers of his left hand are also slightly flexed, holding on to a book-roll between his index finger and his thumb. Fingernails are indicated. Yedîʽbêl is wearing a wide finger ring, with a central inlay, on his left little finger. 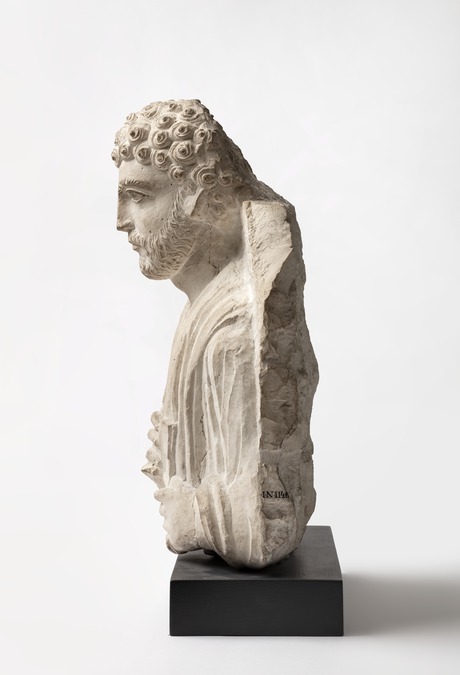