Relief with portrait bust of woman/ ”The Beauty of Palmyra”

On this grave relief of a woman from Palmyra in Central Syria well-preserved paint adds to the striking appearance and is visible to the naked eye. She goes by the name ”The Beauty of Palmyra”. The sculpture is richly decorated with a mass of jewellery and ornamented textiles. In the centre of much of the jewellery a sunken oval or circular area is seen for inlaid materials such as glass or types of stone. This is also the case with the irises each of which is indicated by a circular flat depression. The colours found are dominated by yellow and red ochre and carbon black, but madder lake and minute traces of gold leaf are also found. The gold appears on some of the many jewellery. The gold leaf is superimposed on different kinds of ground layers including red, yellow and pink to achieve different tonal variations of the gold. VIL-imaging was performed without any result on the present of Egyptian blue. An FT-IR analysis revealed the use of beewax, perhaps Punic wax. Further results are yet to be confirmed. The results of the investiagtion indicate the use of different materials including gold, the inlaid eyes and jewellery and the colouration to achieve an overwhelming polychrome impression.

The relief depicted here is rectangular, and with a centrally-placed female bust. Behind the figure of the woman, often referred to as the ‘The Beauty of Palmyra,’ there is a ridge on the relief background, but little else of the background of the relief is preserved.

The bust itself depicts an unknown woman, shown frontally, with the features of a foreign-born individual, potentially from India. The stand-out features of her facial portrayal are her oval-shaped face, almond-shaped deeply-inset eyes with their thick upper eyelids, and fleshy cheeks. Her eyelids are extended beyond the end of the lower eyelids, the irises indicated by a circular depression, which can indicate the possibility of an inlay. The eyebrows are slightly curved, almost obliquely, stretching from the foot of her nose to her ornate headpiece. Her nose too is also distinctive, albeit partially missing on the left side due to damage. Short and wide, her alae (side of the nose) are incised, her nostrils carved. Beneath, her mouth is short, stout, but with full lips, accompanied by a rounded chin with two curved grooves as part of her neck. Her dress and jewellery are ornate, note the inclusion of seven necklaces; a string of beads around the base of her neck; beneath, a necklace composed of several bezels with indications of inlaying, linked together by beaded elements; below, close to the collarbones, a double loop-in chain with a round pendant suspended from the centre. She also wears a ring, in similar design to her necklaces, on her right ring finger. Most of her hair is hidden beneath her jewellery; only the thick locks covering the upper half of the ears are exposed. Her hair is veiled, indicating a sign of modesty and demure appearance. The veil continues over her shoulder, and falls behind her upper arms.The Beauty of Palmyra also wears head ornamentation: a central head ornament, two head-chains, and pendants. The central ornament is composed of a rectangular bezel, partially damaged, fastened where the headband meets the turban. The borders of it are decorated with incized, oblique lines. Above and below this, oval bezels with beaded borders are linked into the central square bezel. The lower head chain is comprised of alternating rounded beads together with conical beads, concealing a majority of her forehead. Above this, the upper head-chain is comprised of round elements of incised borders, that are linked by beaded elements. All head adornments run from either side of the forehead bezels down towards the top of her ears. Beneath all of her fine jelwellery, she wears a tunic and a himation. The tunic is wide in neck line, rounded, and tight-fitting sleeves that end above her elbows. The cuffs of the tunic are also decorated, with a narrow border of incized, oblique lines. Her himation, traditionally a form of Greek dress, falls over her left shoulder and diagonally under her right arm, and is fastened on her left shoulder by a brooch. This brooch is circular in shape; decorated with a central inlay, and a pattern of circular patterns and dots.

There is damage to the statue, as aforementioned in discussion of her nose. The left wrist, elbow and lower left side of the veil are all missing. There is severe damage to the veil on the crown, but less to the turban, frontal ornament, head chain, left hair ornament, right cheek, mouth, drapery below brooch, right hands, and ring fingers. There are two cracks: from right eye to left side of chin, and from right side of veil, across right shoulder to right elbow.

UV-FL: A strong pink/orange fluorescense is distributed in folds on the turban and on the diadem under the turban suggesting the use of an organic lake. The veil and the left han exhibit a blue/white fluorescense. Areas with red and yellow painting absorb UV-radiation and appear darker on the lips, however less characteristically. Areas along the lower edge of left hand, the veil and the left hand bracelet exhibit a strong yellow/greenish fluorescense due to modern plaster.

VIL: VIL-imaging was performed without any result regarding the presence of Egyptian blue

XRF: XRF-analysis showed a high content of iron (Fe) and lead (Pb) on several of the coloured areas possibly suggesting the use of lead white and iron oxide pigments which are the principal colorants in naturally-occurring red and yellow ochres respectively.

FT-IR: A sampling strategy has been developed on the basis of the preliminary investigation. A sample with a surface area of circa 0.25-1 mm2 was taken of a brown semi-transparent material covering minute traces of gold on top of a pale pinkish layer identified as madder lake by UV-imaging. The FT-IR spectru showed similarities to calcium carbonate, silicates and beewax probably without the fatty acid. The absence of the fatty acid may suggest the use of Punic wax, but this has not been confirmed. 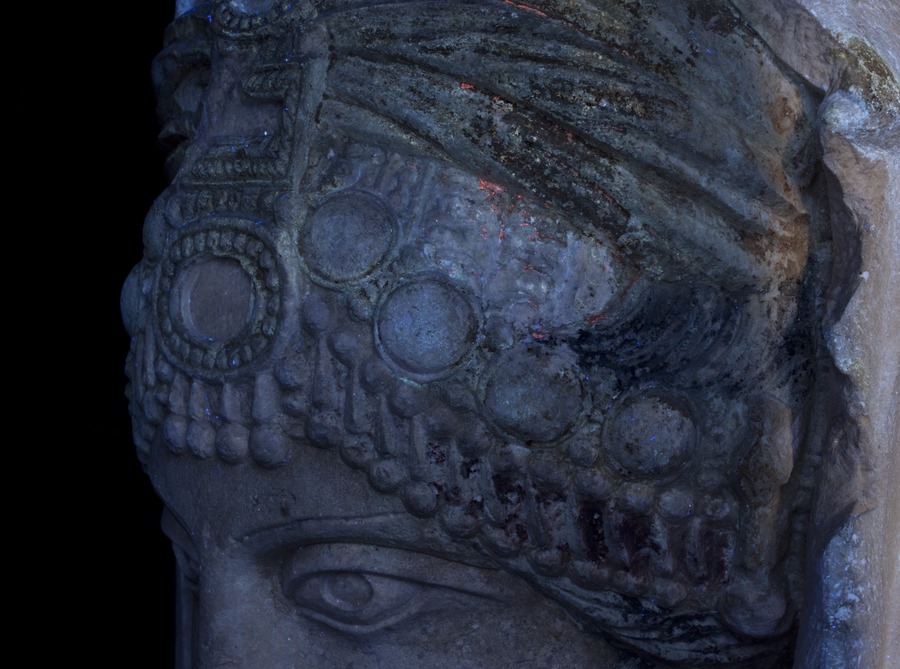