The colossal head of a Roman woman reveals extensive remains of original coloration. Especially in the hair compact layers of yellow and red with black and blue grains are observed. In two cases gilding is found on top of a lock of hair suggesting the use of gold for highlights. Remains of a pinkish layer and scattered particles of red on skin parts evidence the use of carnation colour. Faint traces of red accentuates the iris and the mouth is emphasized by a deep red colour between the lips. On top of the red layer a white layer is observed.

The head is made of white marble with a yellow-brown patina. The formation of the neck indicates that the head had been intended for insertion in a statue. The hair is parted in the central and frames the face in a succession of regular waves, gathered at the nape. Part of the hair is gathered on top of the head in an “Aphrodite bow”. There are portrait-like features, even though a clear identity cannot be established.

The marble surface appears to have been deeply cleaned. Tool marks from abrasion are visible throughout the entire surface. The neck shows areas revealing a high gloss. It remains inconclusive if the portraits skinparts originally were polished.

The hair shows extensive remains of multiple coloured layers. In the drilled recesses black is usually used as a ground topped with a red and sometimes a yellow layer. Scattered particles of blue appear all over the hair. In a couple of instances gilding is found on the very top of a hair lock. A yellow layer appears to be the bolus. Between the lips a compact, red layer is observed and on top of it a white layer. In the corners of the mouth black.

Both eyes have scattered red particles and the left eyebrow has a red layer.

Skinparts are deeply cleaned and only few red grains remain. However, on the left side a pinkish layer with red compounds is observed. A cross-section of the coloured layer reveals carnation colour consisting of two layers. On top of the marble af light yellow layer with red grains followed by a brownish layer.

Imaging does not show flourescent phenomena related to organic lakes or resins. However, a white substance covering the lower part of the face including the damaged nose and parts of the hair becomes visible. The white layer remains so far unidentified.

Scattered particles of Egyptian blue is seen in the hair. Only few grains are identified on skin parts and in the eyes.

On skinparts ironoxides dominates (Fe) (<1500 ppm). Also led (Pb) (<20 ppm) and copper (Cu) (<20 ppm) and calciumcarbonate have been identified as part of the carnation colour.

F. Poulsen (1951), Catalogue of Ancient Sculpture in the Ny Carlsberg Glyptotek, Copenhagen, cat. No. 709a. 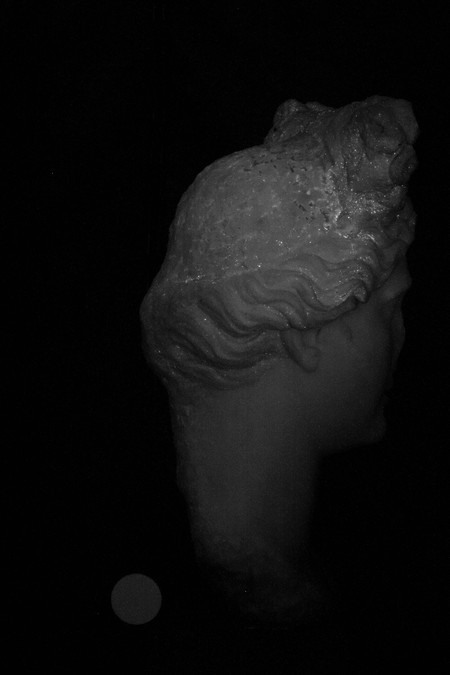